Love for the Holidays 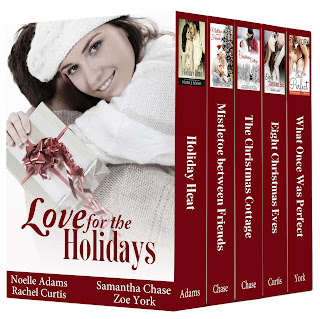 Love for the Holidays

From fake relationships to secret affairs to best friends falling in love, everything changes at Christmas.

HOLIDAY HEAT by Noelle Adams - After being hit with heartbreaking tragedy, Carrie has thrown herself into a hot, secret relationship with Matt. With Christmas approaching, she realizes she might want even more from her sexy, damaged artist, but the boundaries around their relationship make anything deeper than sex impossible. A new, steamy romance.

MISTLETOE BETWEEN FRIENDS by Samantha Chase - Lily and Cam have been friends all their lives, and their relationship has never been romantic. But when they pretend to be dating so they can spend the holiday with their families in peace, they realize their fake romance might actually be real. A new, sweet romance.

THE CHRISTMAS COTTAGE by Samantha Chase - Spending the night trapped by a blizzard in a romantic Christmas cottage with the man she's loved for years has Lacey wondering if fairy tales really do come true. A sweet romance.

EIGHT CHRISTMAS EVES by Rachel Curtis - One Christmas Eve, Cyrus Owen, the over-indulged teenage son of a wealthy businessman, finds ten-year-old Helen on the side of the road. Eleven years later, he is desperately in love with her. This is how it happens... A mostly sweet romance.

WHAT ONCE WAS PERFECT by Zoe York - For Laney, the worst part of returning to her hometown for Christmas is confronting Kyle, the man who broke her heart twelve years ago. When they rediscover their perfect chemistry, Kyle has to convince Laney to let him back into her heart. A steamy romance.
Excerpt from Mistletoe Between Friends by Samantha Chase
“Focus, Lily!” he snapped and then immediately apologized for his tone.  “The holidays are here, my friend.  That means that there will be a steady stream of parties and get-togethers that we are going to be forced to go to and will have potential spouses thrown at us from every angle.”
“Personally I’m waiting for them to just position us at the foot of the driveway with mistletoe over our heads and signs taped to our chests that say ‘Please marry us’.”  The thought sent a shiver down her spine because she was really only partially kidding.  Lately her mother had really seemed to kick up the campaign to marry Lily off.  Not a day went by where Lily wasn’t asked if she’d met anyone decent or what her plans were for the future.
Dealing with her mother was an exhaustive full-time job within itself.
“I think it’s safe to say,” Cam began, breaking into her train of thought, “that neither of us is looking forward to another holiday season spent ducking and weaving through get-togethers to avoid the match-making patrol.  Agreed?”
“Agreed.  But what choice do we have?  Other than packing our bags right now and both of us moving overseas to get away from the insanity?”
“I’m being serious here.”
“You’re always serious, Cam.  I’m trying to get you to break that habit.”  When she got no response from him she sighed with annoyance.  “Okay, what do you have in mind?”
“We take ourselves off of the market.  If we’re involved with other people, they can’t spend their time trying to marry us off.”
“But we’re not involved with other people; that’s the problem.  Isn’t that what we’ve been talking about for the last hour?  I’m so confused…”
“You’re not confused, Lily, and don’t play the ditzy card with me,” he said patiently.  “I’m saying that we pretend that we are involved.  We.  You and me.”
AUTHOR Bio and Links:
Noelle Adams, Samantha Chase, Rachel Curtis, and Zoe York are four bestselling authors of fun, smart, and contemporary romance, from sweet to sexy, who are collaborating on this holiday anthology.
Beginning on December 11, Love for the Holidays will be on sale for just $.99!
Book Trailer: http://youtu.be/UNVyuN88VEQ or embed code:
Author websites:
http://noelle-adams.com/
http://www.chasing-romance.com/
http://rachelcurtisauthor.com
http://zoeyork.com/
Buy links:
Amazon: http://www.amazon.com/Love-Holidays-Christmas-bundle-ebook/dp/B00GH2TTR0/
B&N: http://www.barnesandnoble.com/w/love-for-the-holidays-noelle-adams/1117334641
All Romance eBooks: https://www.allromanceebooks.com/product-lovefortheholidaysfivebookchristmasbundle-1338079-166.html
The authors are giving away a $25 gift certificate to a randomly drawn commenter. You can enter the drawing by going to http://www.rafflecopter.com/rafl/display/23775a2  You can find their schedule at
http://goddessfishpromotions.blogspot.com/2013/11/book-blast-love-for-holidays-by-noelle.html
Posted by Elaine Cantrell at 11:00 PM

Thank you so much for hosting Love for the Holidays!

So happy to be here today! Thank you for hosting us and Love for the Holidays!

Thank you for featuring Love for the Holidays today!