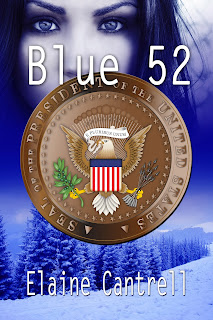 Hello, readers, I'm Elizabeth Lane, and my co-hostess is my cousin Nikki Lane. Every December we take over Elaine's blog to give her a break. I'm especially fond of Elaine's new book Blue 52 because her hero Hank Lovinggood is my son. Blue 52 is a sequel to Return Engagement which told the story of me and Hank's father. Elaine said she's working on a book about my younger son, David. I can't wait to read it. In this excerpt, Hank just arrived at a Christmas party. The first speaker is his hostess.

"I asked Elaine if you were bringing a date tonight, but she said no…"

"Millicent, please don’t tell me you want to fix me up with somebody."

Millicent laughed as though he’d said something hysterical. "Of course I do. You’re one of the country’s most eligible bachelors, but you hardly date at all. Anyway, you’ll like this woman. I met her a few weeks ago when Vivian Turner had a launch party for that new artist, what’s his name, Peter Hamilton. She’s Peter’s cousin. She’s pretty too."
Hank made a mental note never to come here again.

Thirty years later Hank Lovinggood embarks on a quest to prove his mother's innocence and punish the killers who took his family from him.  Together Hank and lovely physicist Kathryn Sinclair confront an implacable, twisted, merciless enemy who'll do whatever it takes to hide the truth forever.

Interesting, I'm also wondering if the mystery woman will be Kathryun...intriging snippet!

Is it bad that I had to laugh? I make so many mental notes about people to avoid in the future that i end up forgetting why I'm avoiding them.

I'm intrigued. Who is the mystery woman? Kathryn?

hy do ,,,peope have such a desire to "fix other people up?

Wow, Hank really doesn't want to be fixed up, does he? Well, can't say that I blame him. Fun snippet!

Ah yes, the matchmakers. Many have ulterior motives. Great snippet. :)

Awkward moment for him. No wonder he's making a mental note not to go back there again. Hope Hank can get out of there - fast!

I would definitely be running in the opposite direction. Good wording to make us feel his awkwardness due to these matchmaking attempts.

Either the woman he's being fixed up with is the woman of his dreams (despite his reluctance) or she is going to be truly horrid. Awesome tension in this snippet :) Thanks for sharing :)