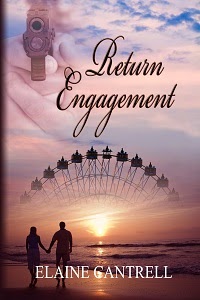 Welcome to Snippet Sunday and Weekend Writing Warriors, your chance to sample the writing of a talented group of authors. I'm been sharing excerpts from Return Engagement. In all of the excerpts, which I didn't put in order and should have, my hero and heroine have met on a California beach ten years after his father broke them up. Dad didn't think Elizabeth was good enough for his son. Richard's father is a powerful senator, and he plans for Richard to be the President of the US one day. The senator doesn't like Elizabeth because she's an actress who comes from a bad background.In this excerpt my heroine is thinking of how Senator Lovinggood broke her and Richard up. He stopped by her house and had a little talk with her.

The senator’s cold eyes bored into hers. “Richard is only seventeen, but you are twenty-two. Presumably, you are more experienced than he is. Truthfully, I blame his infatuation for you on his inexperience. Don’t take advantage of an impressionable boy, Miss Lane. Richard isn’t a toy to be used for your pleasure and then discarded. He’ s being groomed for important work in the future, but if he keeps seeing you he has very little chance of winning any political office. If you care about him let him go. ”


Return Engagement is available at

Oh, he will Teresa.

I'm probably going to be in the minority here - I certainly don't respect the Senator's motivations, but as I parent I would be concerned about a 17 year old and a 22 year old. I would have felt less apprehensive if he were 18 or 19. I was kind of listening to him up through this "...I blame his infatuation for you on his inexperience. Don’t take advantage of an impressionable boy, Miss Lane. Richard isn’t a toy to be used for your pleasure and then discarded." After these lines though h basically tol her that he was interested in Richard's political future (living vicariously?) and not his welfare.

Overprotective dad with the future all planned ... not good! :-)

Wow, he's covering all the bases, here. He accuses her of using his son for sex and then tells her that if she cares for him, she'll know he deserves better.

I have the feeling that if she had been some kind of political advantage, he wouldn't have cared.

Can't wait to see him apologize!

Nicely played. Great use of tension!

What a nice father!
What if he cared about his son more than about the image of his son carrier for him first?
Because he is the one taking advantage of his son so far, not this girl.

great scene. I'd probably not agree with the dad if the son was 18.

I have to admit, I'm with Chelle on this one...as a parent, I'm more concerned with the age difference between them. If she were only, say, 18 or 19, it would be different, but 22 is a huge age gap for someone whose underage. So, I'm kind of with the senator here, though I don't like him. I'm also curious to know how she justifies the age difference to herself. Interesting snippet. I'd definitely keep reading to find out more.

So they cared for each other ten years before-he's seven then. Seventeen is no biggie. He's been carrying his love for a long time. Terrific scene, Elaine

Interfering parents are why many relationships go very wrong. Just look at Romeo and Juliet! But I can see that if she loved him, she's be naïve enough to do what his father asked. Glad they got back together.

To clarify, Richard is now 27. He met her when he was 17. My heroine just had a flashback here.

I'm with Chelle and several others - the fact he was 17 while she was 22 stopped me. Not saying I don't believe they could be in love but he was still a minor.The excerpt was very well written and if he was 18, I'd have been totally on board.

I dislike the Senator, but agree with those who feel a five-year age difference is a bit on the inappropriate side at 17 and 22. Although I do love that this story has an older woman with a younger man, since I love younger men myself.

I understand some concern, given his age at the time, but the Senator's motive seems to be more about living through his son than caring whether or not the kid gets hurt.

Wow, Richard is going to have some strong opposition in the Senator. Wonder what he'll choose to do...

Not liking your senator, which means you've drawn him very well. Great snippet.