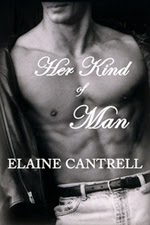 My sample today is from one of my favorite books, Her Kind of Man. The book is on sale at Amazon and the publisher for only .99. You know you need something to read this weekend, so pick up your copy before the price goes up. Now, here's that excerpt. This takes place on their wedding night.


Ross had drifted off to sleep with a muscled arm thrown across Kara’s waist. She wondered if she could slide away from him without waking him up. She eased forward, but his arm tightened around her and pulled her back against him.
Near panic swept over her. She couldn’t breathe! She had to move away from him. This time she didn’t try to ease away. She pushed his arm away, and Ross turned over to his other side and freed her.
She pulled the covers around her shoulders and wished he hadn’t objected to her  putting her nightgown back on after they’d made love. “I like the way you feel against me,” he'd whispered in her ear, so of course she'd left it off.
She’d only been married a few hours and had already learned a lot about her character. Unhappily, most of it was bad. She guessed she must have a lot of her father in her. After all, what decent woman would behave the way she had  with a virtual stranger? Hadn’t she only been going out with Ross for a few weeks?
Her breath came faster now. Maybe Ross thought she was a slut. She didn’t like that word, never had, but it sure did describe her behavior. It made her cringe to think of the things she had begged him to do. He’d whispered words of endearment to her and treated her so gently and tenderly. Didn’t it bother him that his wife had moaned and bucked against him like he was bull in the barnyard?
She’d expected to find physical satisfaction in her marriage, but not the wild, dark, burning waves

which had swept over her and left her exhausted, sweaty, and shaken. Yes, undoubtedly her behavior

was a legacy from her unknown, deviant father, for even though she didn’t love Ross she knew one

thing; the thought of a repeat performance totally took her breath away.


Buy it at Amazon or Lachesis Publishing